The story that brought us here …

Bodegas Aldonia emerges as such in 2006 by the 4th generation of a winemakers family with the aim of both, follow this long tradition and elaborate wines adapted to the modern times, with the philosophy of providing a personal and different way of understanding wine.

Aldonia is a derivation of “La Dona”, one of the noblest of the family vineyards, which along with the vineyard “La Dama,” are the superior terroir of the winery.

Therefore, Aldonia is formed by a new generation, but with tradition.

The road that leads us to today, we have to start some time ago. It was the second half of the nineteenth century when French vineyards were attacked heavily by a pest, an insect called phylloxera, so growers were forced to leave the neighboring country in search of wines to meet the growing demand of their markets. Rioja was considered the best region for this.

As this pest was slow to be controlled, some French traders settled in the region producing wines with their techniques, using the grapes purchased from growers in La Rioja, which prompted the expansion and modernization of the Rioja wine industry, both by opening the French market, such as knowledge of new techniques of production and aging. Specifically, the “Bordeaux method” to develop a new type of wines: the “fine wines”.

Our great-grandfather, captivated by the arrival of these new techniques which involved a complete change in the way of making wine, started buying a series of plots and planting vineyards. He also built a small warehouse for storage and winemaking. The French bought the bulk of production in order to be according to their methods, teaching him to do these new techniques.

But in the early s. XX, everything is truncated by the arrival of phylloxera in the Rioja, which infect the vines with devastating consequences and it had to rethink the whole vineyard.Our Grandfather continued with activity and all subsequent work done while buying some plots more.

Meanwhile, the Spanish Civil War marked a break certainly important in the activity. Times were hard and the old winery had a major theft.

In one of those robberies, the old iron door was shattered, and it was only possible to get a few small remnants.

A small piece with three wrought iron links was one of the few remains that we recovered from the old family winery. 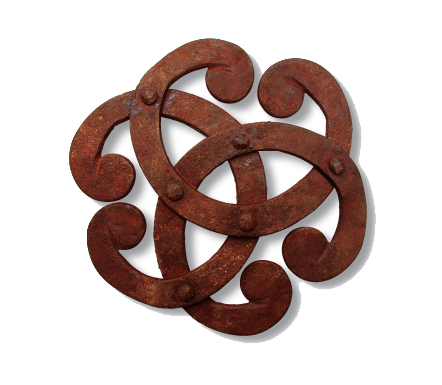 However, it holds great meaning: it mimics the interweave of vine shoots and tendrils, and symbolises the union of body, mind and soul, which the wine brings into harmony, since it is health for de body, inspiration for the mind, and recreation for the soul. A balance that provides wellbeing. It is also associated with Sun, spring, fertility, as well as the union between people that is strength and leads to prosperity. Today, it is the symbol of our project, in honour of those who taught us and instilled in us their love for the vineyard and their passion for wine. The central part forms the “A” of Aldonia; a depiction of our desire to bond with people to continue sharing in harmony this fascinating culture.

In 2006 we picked up the witness, being the fourth generation family that continues this work, helping people to enjoy when drinking a glass of our wines and be part of our family. With support in the knowledge that our ancestors have transmitted to us tried to print our way and vision to understand the wine.

From this moment we want to write our story with you and you also take part of it, participating with us.