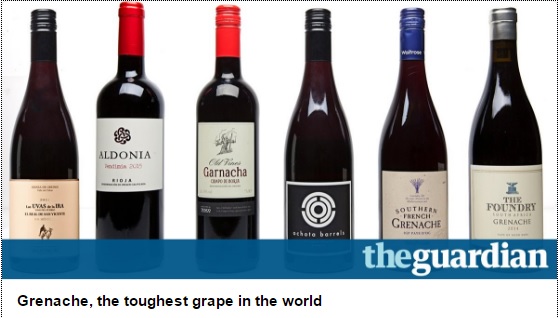 Grape vines of all kinds can cope with the most extraordinarily difficult and extreme environments. But few varieties of this tenacious plant are as tough as grenache, aka garnacha in Spain. It can survive, even thrive, in some of the dustiest corners of the wine world, roots plunged many feet deep into inhospitable terrain seeking out moisture.

The wonder of grenache is that the meagre crops of fruit produced by vines which can be anything up to 100 years old create some of the most vivacious wines around: a stream of soft, mouth-filling juiciness, with flavours of bramble jam, raspberry, cherry, tangy plum and paprika. How all this primary-coloured flavour emerges from such harsh surroundings is a wonder of nature on a par with something from a David Attenborough documentary – like one of those desert plants that lie dormant for years waiting for the briefest rain shower to bring them into bloom.

If there’s a better-value red wine style in the world – a better yield of fruit flavour per pound – than the absurdly underpriced old-vine garnachas of the Campo de Borja region of Aragon in northern Spain, I’ve yet to find it. Wines such as Bodegas Borsao Garnacha 2015 (£5.95, slurp.co.uk) and the Co-op’s Gran Vista Garnacha 2015 (£4.99) have so much more about them than the sweetened alcoholic Ribena that so often passes for wine at the £5 to £6 level these days.

Three unexpected wines to usher in a year of experimentation and innovation. Whatever you do, steer clear of that dry January nonsense, says David Williams
With the odd exception, grenache/garnacha has always been a little undervalued, a lack of recognition that is at least partly explained by winemakers traditionally hiding it in a blend. In regions from France’s southern Rhône Valley to Catalonia’s Priorat and Australia’s Barossa, there’s often a feeling that the plump nature of fully ripe grenache needs stiffening with the darker syrah, the meatier mourvèdre or the dusky carignan, while in Rioja, garnacha frequently acts as a fruity seasoning for the more upright tempranillo. Even when it is allowed out on its own – as it is in the great Châteauneuf-du-Pape of Château Rayas, for example – in many cases you wouldn’t know it from the label.

Grenache’s reputation has also suffered more than most at the hands of incautious winemakers: leave it to get too ripe and the abundance of fruit becomes a syrupy, alcoholic jamminess.

When it’s good though, it certainly deserves a place at the top table – indeed, over the past decade,it’s made more strides than any other grape variety, with producers developing a much wider palette. It can provide succulent, spicy easy-drinkers such as Honoro Vera Garnacha 2015 (£8.45, Booths) from another Spanish region, Calatayud, or the always-alluring Yalumba Bush Vine Grenache 2014 (£12, Morrisons) from South Australia. Or it can produce lush winter warmers such as Domaine of the Bee 2011 (£27.50, thesampler.co.uk)

Most interesting of all, however, is the new wave of grenache made in a more restrained style. The prime movers behind this re-imagining of grenache as the “pinot noir of the south” are Spanish, with the likes of Daniel Jiménez-Landi in the hills of Mentrida, Bodegas Joan d’Anguera in Priorat’s neighbour Montsant, and Bodegas Aldonia in Rioja all conjuring subtly earthy, graceful, light-coloured garnachas from very old vines.

There are fine examples, too, in the New World’s new wave. Producers such as Australia’s Jauma, the Ministry of Clouds and Ochota Barrels, and the likes of Craig Hawkins and David Sadie from South Africa’s trendy Swartland set have all contributed to grenache’s more nuanced 21st-century personality in wines that, no matter how gentle they might feel, are still all about the sun.

Waitrose Southern French Grenache 2015 (£6.49, Waitrose)
Spicy and supple, with a sprinkling of white pepper and dried herbs adding savoury interest to the brisk raspberry and cherry fruit, this is good-value grenache in light, thirst-quenching, bangers-and-mash-matching mode.

Bodegas Aldonia Vendimia Rioja 2015 (£12.50, Vinoteca)
Having been somewhat eclipsed by tempranillo in Rioja, garnacha has made a comeback in recent years. At Aldonia it takes a leading role, joined here by 40% tempanillo in a fluently elegant, red-fruited, super-silky red.

Ochota Barrels The Fugazi Vineyard Grenache, South Australia 2014 (£28.50, Honest Grapes; Handfords; Prohibition Wines)
From a new-wave Australian cellar that puts the emphasis on fresh drinkability, this is a flat-out gorgeous take on grenache with a core of crunchy black and red berries and a streak of peppered-steak bloody-meatiness.

Aldonia, summer wine in The Spectator.